What is Moss Agate

Moss agate is a type of chalcedony, a member of the quartz family that is characterized by its small, moss-like inclusions. The stone gets its name from these inclusions, which resemble moss or leaves. Moss agate is found in a variety of colors including green, red, blue, and yellow. The most common color of moss agate is green, which is said to represent growth and new beginnings.

How was Moss Agate Crystal Formed?

Out of all the different types of agates, moss agate is unique because it is the only agate that does not form in layers. Instead, moss agate is created when silicon dioxide and water seep into cavities in rocks, filling in the spaces with minerals. over time, these minerals form the distinct patterns that are characteristic of moss agate.

Moss agate is found all over the world, but some of the most notable deposits are located in Brazil, India, Russia, and the United States. In fact, some of the oldest examples of moss agate can be found in Mesopotamia- which is now modern-day Iraq.

The Magical History of Moss Agate

Moss agate has a long history of being used for magical and religious purposes. In ancient times, it was used as a talisman to bring good luck. It was also believed to be a stone of abundance and prosperity. Moss agate was often used in fertility rituals and spells. In some cultures, it was even believed to be able to ward off evil spirits.

Today, moss agate is still revered for its magical properties. It is said to be a stone of new beginnings, making it an excellent choice for anyone starting a new business or embarking on a new venture. Moss agate is also said to attract abundance and wealth. It is an ideal stone for anyone wishing to manifest their dreams into reality.

How Long Does It Take For A Moss Agate To Form In Nature?

Moss agates form over millions of years as layers of sediment build up on top of each other. During this time, water seeps through the sediment and carries minerals with it. As the water evaporates, these minerals are left behind and gradually build up to form the moss agate. 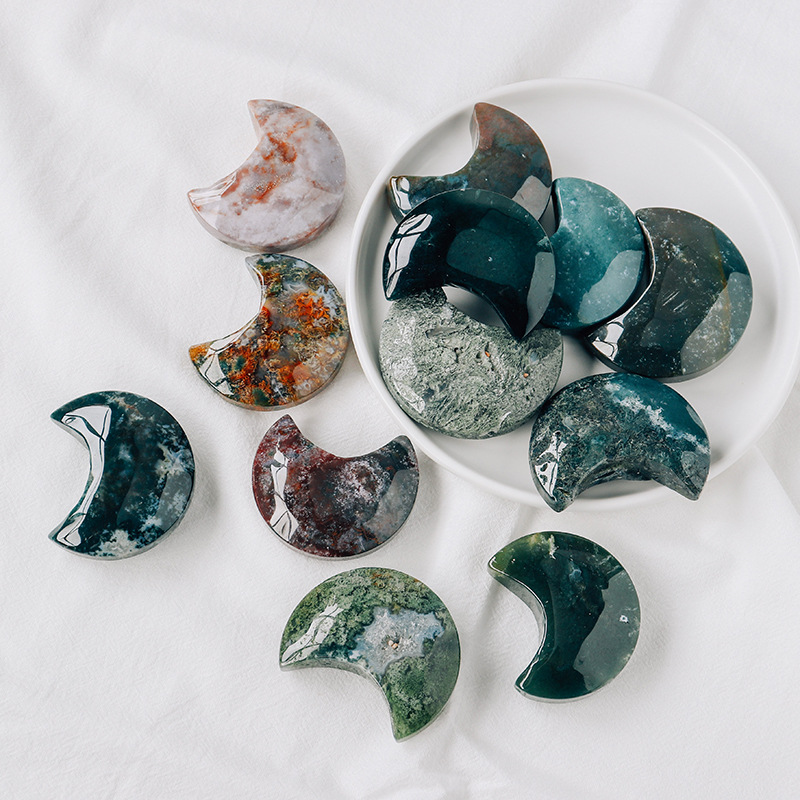 Moss agate is a form of chalcedony that contains inclusions of hornblende or other minerals that give it a mossy appearance. The most common color of moss agate is green, but it can also be found in shades of white, pink, blue, and purple. Moss agate is usually translucent with dark green moss-like inclusions.

Moss agate is found in India, Brazil, China, and the United States.

Moss agate has a hardness of 6.5-7 on the Mohs Scale of Hardness.

Moss agate has a vitreous luster.

The cleavage of moss agate is poor to fair in one direction.

The fracture of moss agate is conchoidal to uneven.

Moss agate is composed of silicon dioxide (SiO2), with inclusions of manganese and iron oxides. These inclusions are what give moss agate its distinctive coloration and patterns. The overall hardness of moss agate on the Mohs scale is 6.5-7.

Moss Agate is known as the “gardener’s stone” because it helps to promote abundance, growth, and new beginnings by releasing old patterns, habits, and memories that are no longer serving you. Moss Agate is also said to be a stone of new beginnings as it helps you let go of the past and move forward into the future with confidence and grace.

In the agate family, green Moss Agate meaning is balance and harmony because it helps to ground you while also opening your heart chakra so that you can give and receive love more easily. Moss Agate is also said to be helpful for those who are feeling scattered or disconnected as it helps to bring focus and clarity while also promoting self-esteem and self-acceptance. 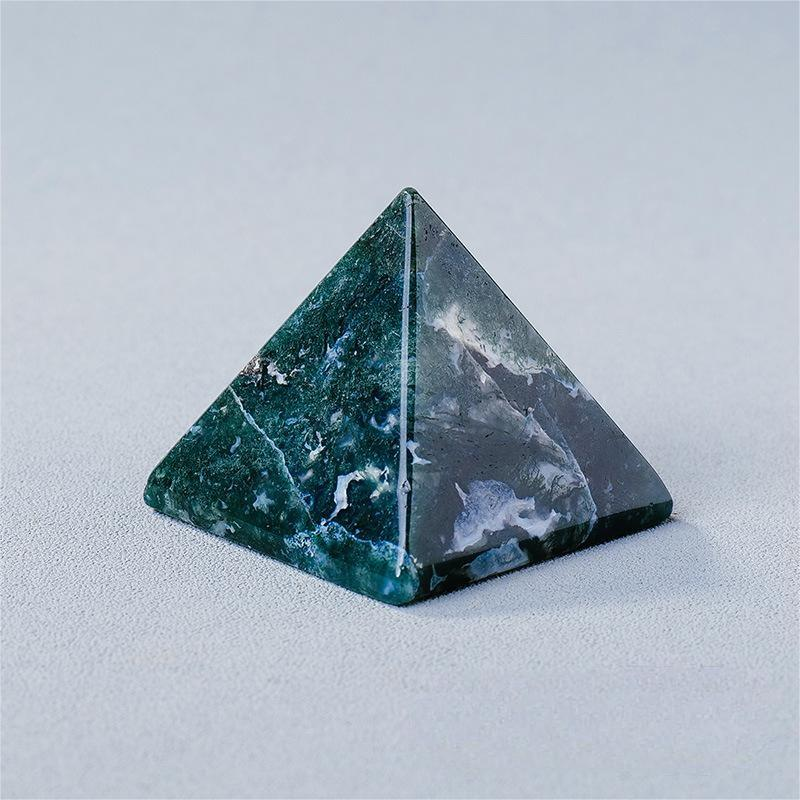 Moss agate is a translucent to opaque variety of chalcedony (microcrystalline quartz) that contains embedded minerals, most commonly hornblende, chlorite, or mica. Its name derives from its appearance which is often reminiscent of moss or foliage. Though not a true agate, moss agate has been used as a gemstone since ancient times and is the traditional birthstone for the month of September in many cultures. It is also the zodiac birthstone for Gemini.

Moss Agate and the Heart Chakra 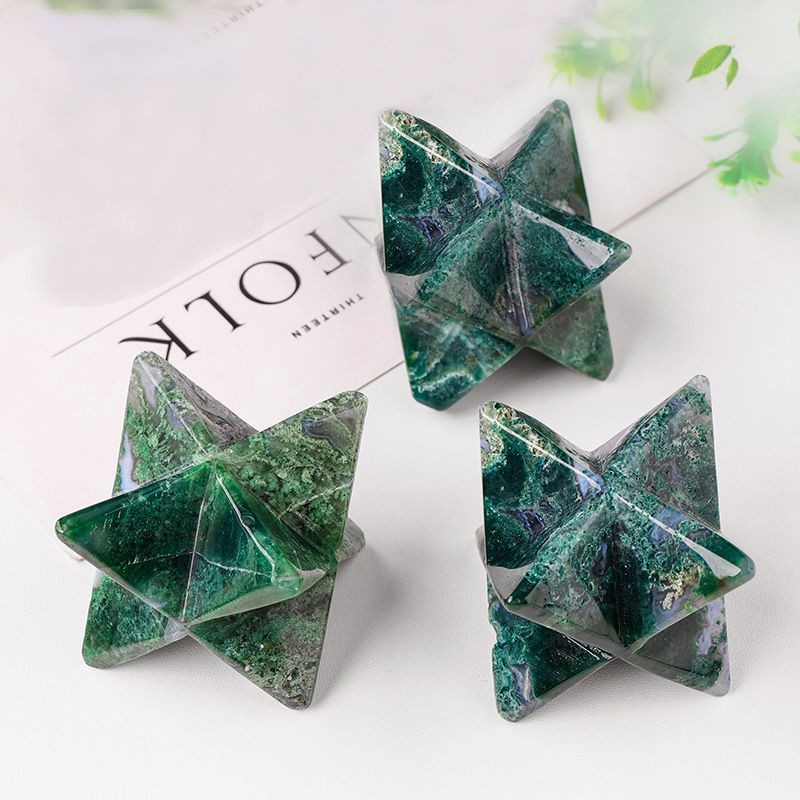 How to Use Moss Agate

If you are looking to manifest your goals with the help of moss agate, there are a few ways you can use this stone. First, you can carry it with you or keep it in your pocket. You can also place it on your desk or in your office as a reminder of your intentions. You can also make a grid with moss agate stones to amplify the energy of your intentions. To make a grid, simply arrange nine stones in a square formation and place your intention in the center of the grid. Leave the grid in place until your goal has been achieved or you feel called to move it.

How to Wear Moss Agate Necklace

Moss agate can be worn as a necklace, bracelet, or earring. It can also be carried in your pocket or purse. If you want to maximize the healing properties of moss agate, it is best to wear it close to your body.

Moss agate is a versatile gemstone that can be worn with any outfit. If you are looking for a pop of color, pair your moss agate necklace with a white shirt or dress. If you want a more earthy look, pair your necklace with browns or greens. Moss agate looks great with both casual and formal attire. 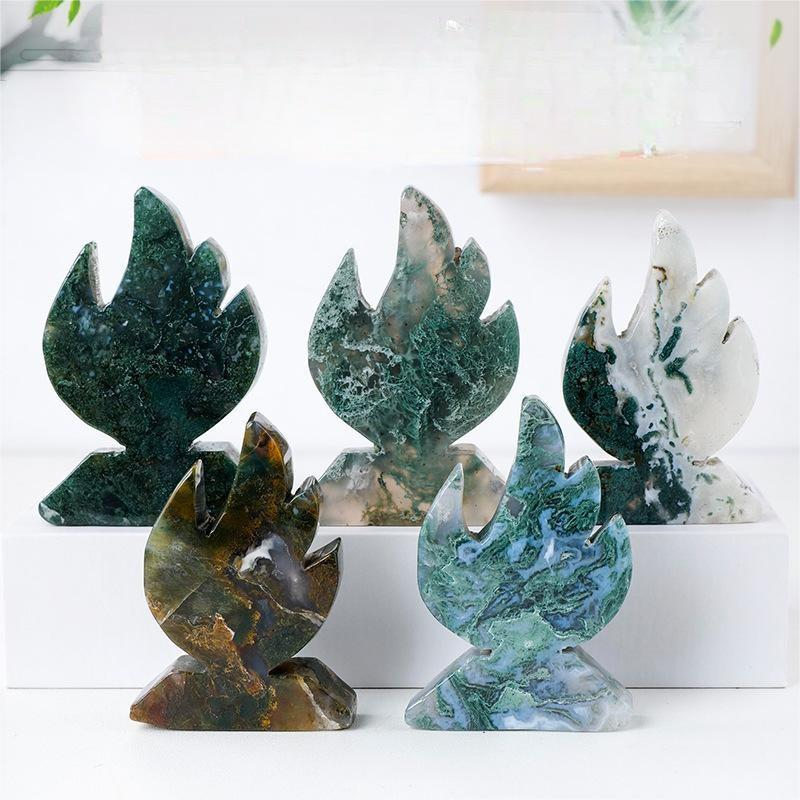 How to Identify Moss Agate

Moss agate can be found all over the world, but it is most commonly found in Brazil, India, and the United States. If you are lucky enough to find moss agate in the wild, you can simply pick it up off the ground. However, most people find moss agate at gem shows or crystal shops. When purchasing moss agate, be sure to inspect the specimen carefully for any cracks or damage. Also, be aware that some sellers may try to pass off fake moss agate such as tree agate or dendritic agate as moss agate. So buyer beware! 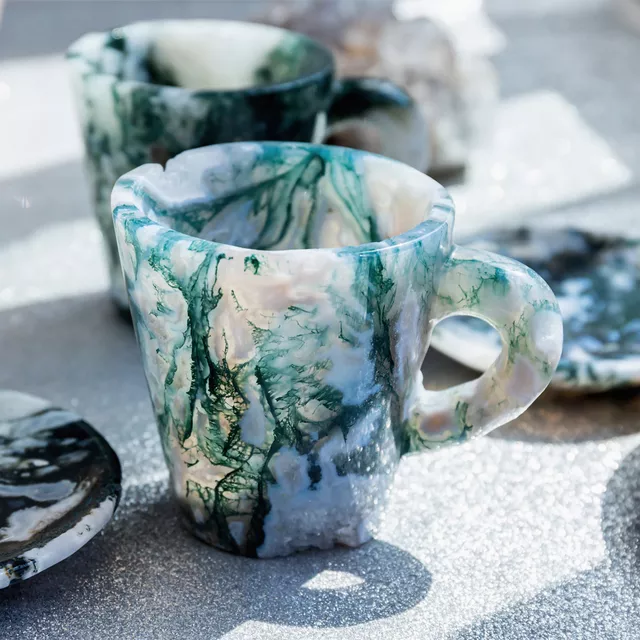 How to Care Moss Agate

Moss agate should be cleansed in running water on a regular basis, as it can absorb negative energy from its surroundings. When cleansing your crystals, always be sure to use purified or distilled water so as not to leave any impurities behind. You can also cleanse your moss agate with smudging herbs such as sage or sweetgrass.

Once your crystal is cleansed, it should be charged under the light of the full moon. This will help to infuse it with lunar energy and amplify its healing properties. To charge your crystal, simply place it on a windowsill or outside in the moonlight for several hours.

When you are finished charging your crystal, you may store it in a cloth pouch or jewelry box lined with soft fabric. You can also place it in a location where it will receive regular exposure to sunlight, such as on your bedside table or near a window. Just be sure not to leave it in direct sunlight for too long, as this can cause the color of the stone to fade.

Where Can You Find Moss Agate Crystal?

Moss agate can be found all over the world, but the best quality specimens come from India. You can also find moss agate in the United States, Brazil, China, and Australia. The best way to find moss agate is to go on a rock-hunting expedition yourself or purchase it from a reputable dealer. Once you have your moss agate, there are a few different ways you can use it.

Moss agate does not contain any toxic chemicals, and it does not release any harmful fumes. However, like all crystals, moss agate should be cleaned regularly to prevent the build-up of dirt and bacteria. You can clean your moss agate jewelry with warm soapy water or a solution of equal parts water and vinegar.

Moss Agate is one of the most beautiful and versatile stones around. If you’re looking for a way to connect with nature, this is the perfect stone for you. With its ability to promote emotional balance and abundance, Moss Agate can help you find peace and happiness in your life. Have you ever tried working with Moss Agate? Share your experiences with us in the comments below! 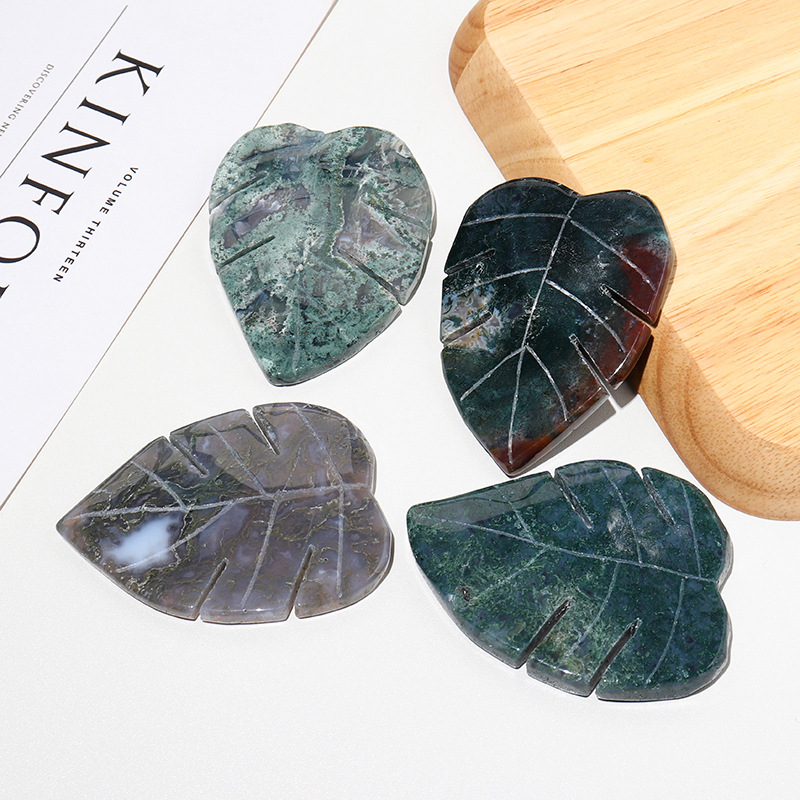 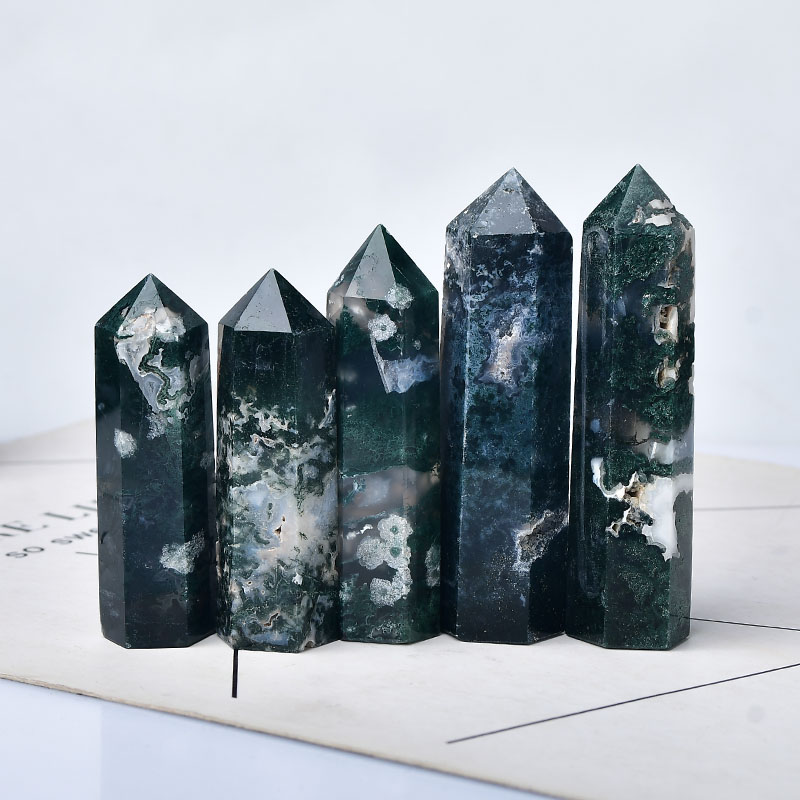 Use overlay text to give your customers insight into your brand. Select imagery and text that relates to your style and story. Alex Gan is a professional writer and content creator who has always had a love for literature and the arts. After completing his advertising and literature degree, he worked as a marketing specialist for several luxury and wheels brands. Alex's writing skills and passion for storytelling soon led him to pursue a career in copywriting and content creation.